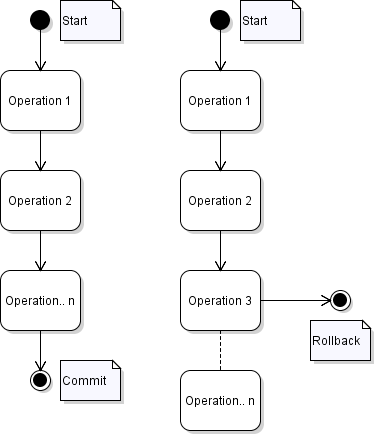 In a Database Management System, a transaction is a single unit of logic or work, sometimes made up of multiple operations. Any logical calculation done in a consistent mode in a database is known as a transaction.

Transactions are often composed of multiple statements. Atomicity guarantees that each transaction is treated as a single "unit", which either succeeds completely, or fails completely: if any of the statements constituting a transaction fails to complete, the entire transaction fails and the database is left unchanged. An atomic system must guarantee atomicity in each and every situation, including power failures, errors and crashes.

Consistency ensures that a transaction can only bring the database from one valid state to another, maintaining database invariants: any data written to the database must be valid according to all defined rules, including constraints, cascades, triggers, and any combination thereof. This does not guarantee correctness of the transaction in all ways the application programmer might have wanted (that is the responsibility of application-level code) but merely that any programming errors cannot result in the violation of any defined database constraints.

Transactions are often executed concurrently (e.g., reading and writing to multiple tables at the same time). Isolation ensures that concurrent execution of transactions leaves the database in the same state that would have been obtained if the transactions were executed sequentially. Isolation is the main goal of concurrency control; depending on the method used, the effects of an incomplete transaction might not even be visible to other transactions. For example, when a user is creating a Purchase Order and has created the header, but not the Purchase Order lines, is the header available for other systems/users (carrying out concurrent operations, such as a report on Purchase Orders) to see?

Isolation is typically defined at database level as a property that defines how/when the changes made by one operation become visible to other. On older systems, it may be implemented systemically, for example through the use of temporary tables. In two-tier systems, a Transaction Processing (TP) manager is required to maintain isolation. In n-tier systems (such as multiple websites attempting to book the last seat on a flight), a combination of stored procedures and transaction management is required to commit the booking and send confirmation to the customer.

Durability guarantees that once a transaction has been committed, it will remain committed even in the case of a system failure (e.g., power outage or crash). This usually means that completed transactions (or their effects) are recorded in non-volatile memory (And/or recorded every successful transaction in a persisted transaction log). For example, if a flight booking reports that a seat has successfully been booked, then the seat will remain booked even if the system crashes.

In distributed transactions, all participating servers must coordinate before commit can be acknowledged. This is usually done by a two-phase commit protocol.