Polymorphism is a Greek word that means "many-shaped", referring to the ability to define different classes with identically named methods or properties that can be used interchangeably by caller code at run time.

This is because in Java, all non-static methods are by default "virtual functions." Only methods marked with the keyword final (cannot be overridden) and private methods (not inherited) are non-virtual. Base classes may define and implement methods, and sub classes can override them by providing their own definition and implementation. This will enable you to work with groups of related objects in a uniform way.

There are two types of polymorphism in Java:

We can perform polymorphism in java by method overloading and method overriding. 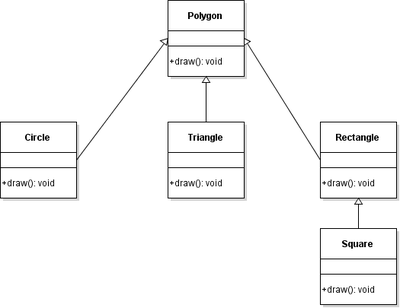 (Inheritance and) Polymorphism in Polygon

As an example, let say that we need to have a functionality that enables a user to create various kinds of polygons on a drawing application. We never know which specific types of polygons the user will create. However, the application need to be able to keep track of all the various types of polygons that are created. In this case, we can use polymorphism to solve this problem in two basic steps:

First, create a base class called Polygon, and sub classes such as Circle, Triangle, and Rectangle. To give more picture, create another class Square which is extends from Rectangle. Give the Polygon class a method called draw, and override it in each subclass to draw the particular shape that the class represents. Later, we will call each class's draw method in our DrawingApp.

When a subclass inherits from a base class, it gains all the non private methods and fields of the base class. Then, the programmer must be able to choose whether to

A sub class that has replaced or overridden a method can still access the method on the base class using the super keyword. Example: super.draw(); as in the codes above.

A subclass can stop inheritance by declaring an override as final. This requires putting the final keyword in the class member declaration. Let's return to our Rectangle, and mark method draw() as final:

Now, during compilation for Square class, we will encounter error "draw() in Square cannot override draw() in Rectangle" overridden method is final

Other articles in this series: